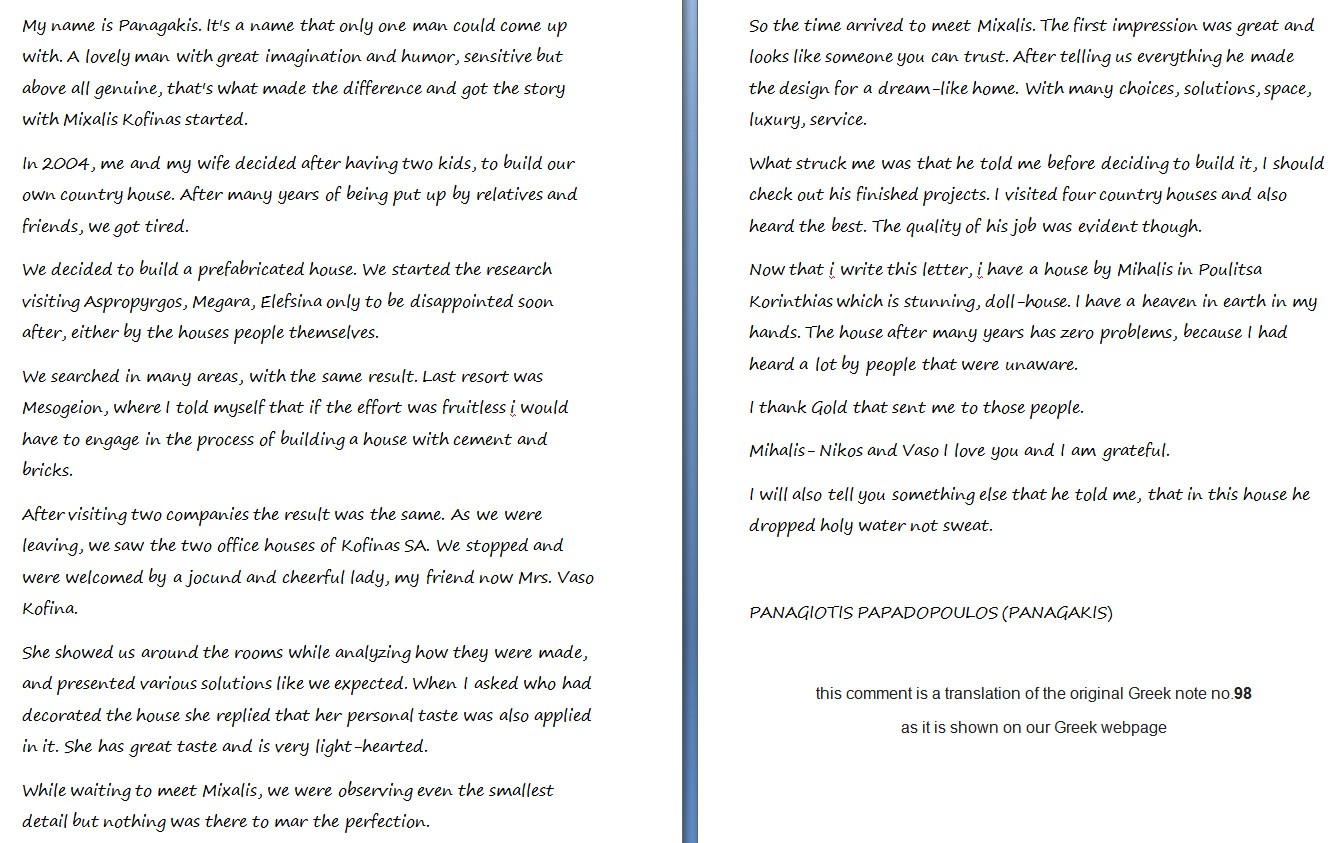 My name is Panagakis. It’s a name that only one man could come up with. A lovely man with great imagination and humor, sensitive but above all genuine, that’s what made the difference and got the story with Mixalis Kofinas started.

In 2004, me and my wife decided after having two kids, to build our own country house. After many years of being put up by relatives and friends, we got tired. We decided to build a prefabricated house. We started the research visiting Aspropyrgos, Megara, Elefsina only to be disappointed soon after, either by the houses people themselves.

We searched in many areas, with the same result. Last resort was Mesogeion, where I told myself that if the effort was fruitless I would have to engage in the process of building a house with cement and bricks. After visiting two companies the result was the same. As we were leaving, we saw the two office houses of Kofinas SA. We stopped and were welcomed by a jocund and cheerful lady, my friend now Mrs. Vaso Kofina. She showed us around the rooms while analyzing how they were made, and presented various solutions like we expected. When I asked who had decorated the house she replied that her personal taste was also applied in it. She has great taste and is very light-hearted. While waiting to meet Mixalis, we were observing even the smallest detail but nothing was there to mar the perfection. So the time arrived to meet Mixalis. The first impression was great and looks like someone you can trust. After telling us everything he made the design for a dream-like home. With many choices, solutions, space, luxury, service. What struck me was that he told me before deciding to build it, I should check out his finished projects. I visited four country houses and also heard the best. The quality of his job was evident though.

Now that i write this letter, i have a house by Mihalis in Poulitsa Korinthias which is stunning, doll-house. I have a heaven in earth in my hands. The house after many years has zero problems, because I had heard a lot by people that were unaware.

I thank Gold that sent me to those people. Mihalis – Nikos and Vaso I love you and I am grateful.

I will also tell you something else that he told me, that in this house he dropped holy water not sweat.