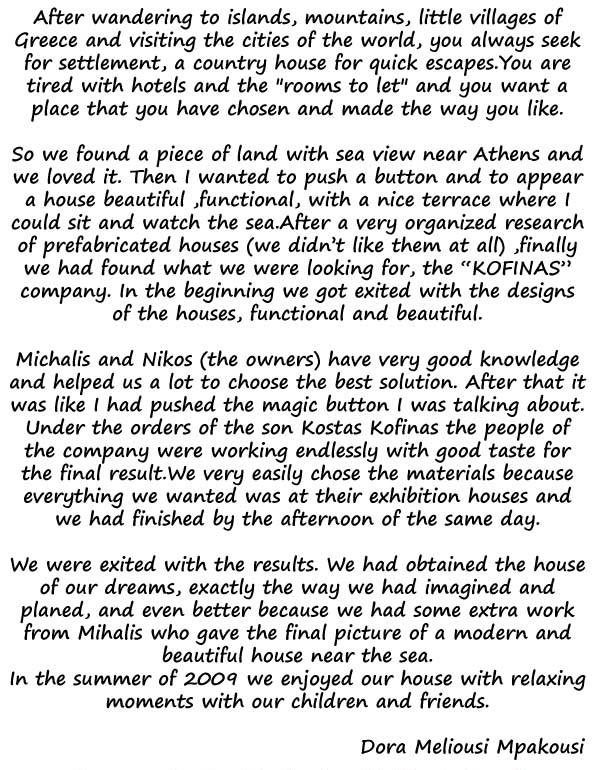 After wandering to islands, mountains, little villages of Greece and visiting the cities of the world, you always seek for settlement, a country house for quick escapes.

You are tired with hotels and lodgments and you want a place that you have chosen and made the way you like.

So we found a piece of land with sea view near Athens and we loved it. Then I wanted to push a button and to appear a house beautiful, functional, with a nice veranda where I could sit and watch the sea.

After a very organized research of prefabricated houses (we didn’t like them at all), finally we had found what we were looking for, the KOFINAS company. In the beginning we got exited with the designs of the houses, functional and beautiful.

Michalis and Nikos (the owners) have very good knowledge and helped us a lot to choose the best solution. After that it was like I had pushed the magic button I was talking about. Under the orders of the son Kostas Kofinas the people of the company were working endlessly with good taste for the final result.

We very easily chose the materials because everything we wanted was at their exhibition houses and we had finished by the afternoon of the same day.

We were exited with the results. We had obtained the house of our dreams, exactly the way we had imagined and planed, even better because we had some extra work from Michalis who gave the final picture of a modern and beautiful house near the sea.

In the summer of 2009 we enjoyed our house with relaxing moments with our children and friends.

Previous: Amazing
All the testimonials
Next: Georgia Basta